Nonprofit You Should Know: Wyoming Equality

This month, we’re honored to spotlight Wyoming Equality — a nonprofit working to unify and advocate for the LGBTQ community in Wyoming. We talked with them about their organization, the work they do, and their experience with Neon.

Wyoming Equality seeks to enhance the lives of gay, bisexual, and transgender people in the equality state. Wyoming Equality is committed to providing: education, information, activities, support, a networking system, and an advocacy system for people impacted by gender and sexual orientation issues.

The group started in 1987, when a small group of gays and lesbians from the Cheyenne/Laramie went on a camping trip. That group eventually started Wyoming Equality. A year later, they started a quarterly newsletter — today, the organization has grown into a statewide initiative to unite and advocate for the LGBTQ community in Wyoming.

With more than 15,000 LGBTQ people in Wyoming, the organization has been working to unite and protect the state’s LGBTQ community for more than 25 years! Over that time, they’ve accomplished a lot — including securing the right to marry in Wyoming in 2014. Here are some of their major accomplishments from the past year:

How they do it

With a small but mighty team, Wyoming Equality initially switched to Neon so they could cut back on costs and admin time. They leverage Neon’s technology to save staff time and focus on furthering their mission.

With Neon, the team has to do less time-consuming tasks — like data entry, supporter tracking, receipting, and mail merging. They’ve also been able to cut back on the number of platforms they use, since Neon can house their members, donors, communications, events, and more. This has helped Wyoming Equality save thousands in admin costs every year since switching to Neon.

Because they’ve been able to save time while cutting costs, they’ve also seen some great results — including a 360% increase in memberships in just one year! Recurring donations have also increased 300%, and overall organization income has increased 87%. Great work!

The organization website (check out their website here) gives supporters plenty of options to get involved, including:

Right now, Wyoming Equality is prepping for Rendezvous: an LGBT camping weekend to celebrate Pride. If you’re in the area, you can buy tickets — or you can donate to support a low-income student’s ticket. You can also click here to make a general donation.

Want to learn more about Wyoming Equality and the strategy behind their mission? Download the case study! 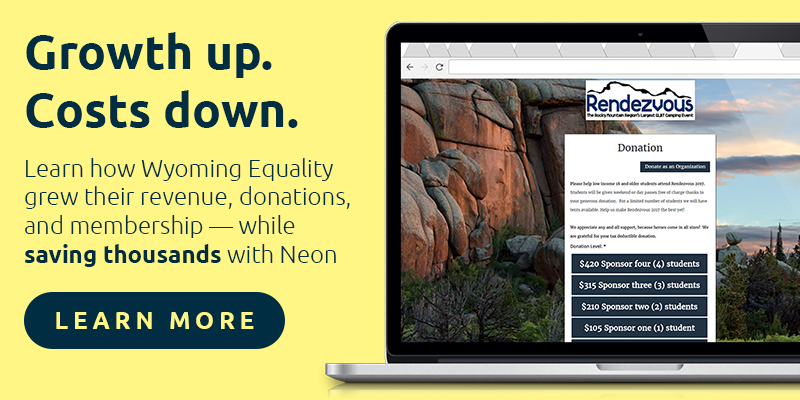 Nonprofit You Should Know: Wyoming Equality2017-06-232017-07-25https://www.neoncrm.com/wp-content/uploads/2018/10/neon-logo-on-white.pngNeonCRMhttps://www.neoncrm.com/wp-content/uploads/2017/06/nonprofit-you-should-know-wyoming-equality.png200px200px
About
Casey Wittekind
Casey Wittekind is the Manager of Professional Services for NeonCRM. She has helped hundreds of clients successfully transition to NeonCRM, by implementing data imports, training staff and working with the Neon Web Studio Team to build industry leading sites. Prior to coming to Neon, Casey was a fundraiser and volunteer coordinator for social justice nonprofits in the Chicago area. She is still an active member of the Chicago nonprofit community, serving as a board member and volunteer at a social services organization. In her spare time she enjoys taking circus classes.