Make the Most of your Year-End Appeal with Data

Ah, the year-end appeal season. Seems like just yesterday we were wrapping up last year’s giving season, and we’re already back at it. Many of you are probably in the early planning stages of your year-end appeal (or will be soon), and we want to help you make the most of it.

We’ve put together some of our best advice on using your data to create effective year-end appeals. Your CRM is a goldmine of valuable donor information, so make sure you tap into it when crafting your campaign. Here are some ways to integrate that valuable data into your year-end campaign.

Look at your needs

Before crafting your year-end appeal campaign, it’s important to sit down and take stock of where you’re at as an organization. Take a look at last year’s campaign and think about any changes you’ll be making this year. What are your goals for this campaign? What tools do you need to accomplish those goals?

Of course, raising money is always the goal. But you might want to motivate donors by promoting a goal amount that can help pay for a specific milestone or initiative. Or your goals may be less finance-related, and more about engaging a certain number or type of donors. Having a concrete idea of what you’d like to accomplish with your campaign will help all the elements of a successful year-end appeal campaign fall into place.

Segmenting is one of those crucial steps that can make or break your entire campaign. The more you segment (or divide) your donors into distinct groups and adjust your ask to each group’s individual interests and needs, the more successful your campaign will be.

At the very least, you should create one segment for your top donors, whether it’s by amount or frequency. Data shows us that those who have previously donated are the most likely to donate again, so it makes sense to create an appeal specifically tailored for VIP donors. Go out of your way to create a personalized ask for these donors, whether it’s an individual letter or in-person follow up.

Focus your asks on whichever channel is most effective for your audience, but don’t be afraid to include campaign messaging on several different channels — email, direct mail, phone calls, in-person asks and even social media. While you may not be tweeting out direct asks, it doesn’t hurt to include similar campaign statistics and messaging so donors get a sense of a unified message.

Since your year-end appeal campaign will be going on for months, it makes sense to integrate aspects of that overarching theme into your organization’s everyday communications. If a donor receives a campaign email, then sees a similar message on a Facebook post a week later, they may remember the email (and the ask), and reconsider making a donation.

With new donations comes something just as good — new data! After months of campaigning, you’ll be ringing in the new year with a fresh batch of donations and information about your donors. Before wrapping up your year-end appeal madness, take a moment to decipher through all that data and look for any trends. Are there specific aspects of your campaign that performed especially well? Did a segment of donors perform better than expected? Make sure to make a note of any trends that stick out to you — writing down any high-level takeaways will be helpful when you start creating next year’s campaign.

While your campaign is still fresh in your mind, you might want to make a list of ideas for next year. Although planning nearly a year in advance may seem like overkill, even a short list of takeaways and suggestions while they’re in your head will help immensely when you begin planning for next year’s campaign. Save yourself the stress and do the work up front — you’ll thank yourself later!

As always, don’t forget to thank your donors! Use all that data to create personalized thank yous that make supporters feel valued and will encourage them to stay engaged. Include statistics of the overall campaign’s performance, as well as information about the impact of their individual donation amount. Even transactional data such as when they donated or their past donation history can make a thank you feel more personal.

Don’t be afraid to send multiple thank yous to each donor. Sending out one immediate/automatic thank you email will confirm the donation for tax purposes, and following that up with more fleshed out emails that detail the impact of the donation and the overall performance of your campaign will make the donor feel valued. Focus on building an engaging relationship with these donors, and they’ll come back to donate year after year. 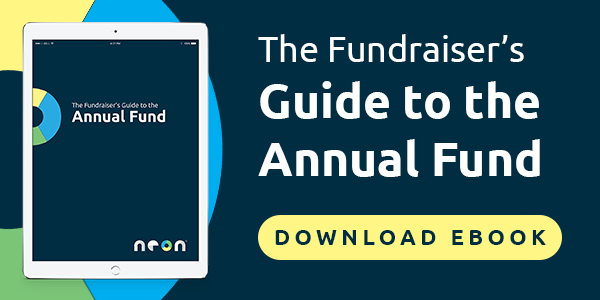 Make the Most of your Year-End Appeal with Data2015-09-242017-03-06https://www.neoncrm.com/wp-content/uploads/2018/10/neon-logo-on-white.pngNeonCRMhttps://www.neoncrm.com/wp-content/uploads/2015/09/64395621_thumbnail-2.jpg200px200px
About
Jeff Gordy
Jeff Gordy is the co-founder of Z2 Systems, Inc., the makers of NeonCRM. Before starting the company in 2004, Jeff worked for the Kidney Cancer Association and knew that nonprofits needed better software solutions to help with their many challenges. He currently serves as the President of Neon One.
Comments
pingbacks / trackbacks